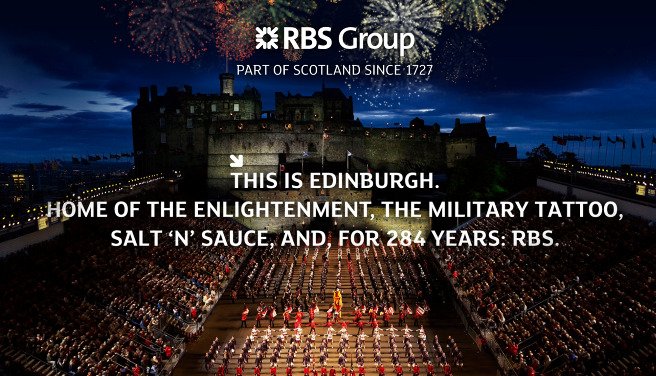 On thursday The Royal Bank of Scotland (RBS) reported another disappointing earnings and formally took itself off the global stage.

“This is a plan for a smaller, more focused, but ultimately more valuable, bank with the vast majority of its assets in the U.K., and for RBS marks the end of the stand-alone global investment bank model,” stated Ross McEwan, Chief Executive Officer of R.B.S.

I don’t invest in banks or insurance companies.Haven’t worked under a bank since 2004 when I left a member of the Royal Bank of Canada (RBC) group to join an independent. And usually don’t comment on the banks unless it has to do with investment strategies, innovation or ethics. All three of which are often lacking in good measure at banks these days.

However having lived, studied and worked in and around Edinburgh for most part of the past five years. I still scratch my head when driving by the RBS Gogarburn headquarters or walking by the historical RBS offices across St. Andrews Square; How did an iconic institution with almost 300 years of history get it so wrong!?

Here is a glimpse of how the bank went from being at one of the largest financial services group in the world to a small U.K. bank. Erasing tens of billions in shareholder value during the process:

May 28, 2006: Sir Fred, having been knighted in 2004, is voted most powerful businessman in Scotland for the fourth year in the Scotland on Sunday Power 100 list. Share price hasnt’ move much in two years and sits at £4.74.

April 16, 2007: Consortium led by RBS enters bidding war for Dutch bank ABN Amro, which was already in advanced talks with Barclays for a friendly merger. Shares climb to £5.78.

April 22, 2008: under pressure from Government, RBS announces £12bn rights issue to shore up its weak capital base. shares still holding up surprisingly at £3.

February 10, 2009: Sir Fred and former chairman Sir Tom McKillop appear before MPs. Sir Fred and Sir Tom apologise for the near collapse of RBS and the “distress” it caused. Shares 23.8p.

I’d like to get some comments from the bankers out there and particularly with any that may have had the pleasure or pain of working at the bank. How did it RBS. get it so wrong, so many times?

Disclosure: I do not have any position in RBS shares.