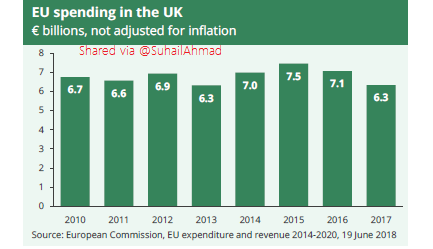 The reason England was set to see such a sharp rise in regional funding (despite the anticipated overall amount for the UK being set to fall by around €1bn relative to 2007-13) was due to the way transition regions were defined in the Council’s 2014-20 proposals. Specifically, parts of England which in 2007-13 had only been eligible for the lowest funding intensity (‘competitiveness and employment’), became ‘transition regions’ eligible for a higher funding intensity in 2014-20 by virtue of having per capita GDP between 75% and 90% of the EU average.